This post is admittedly rather late but here it is anyway. Cardio Grapher is out of beta and has been for some time. The current version is 2.1. Almost all of the work that led to this happened in the first quarter of the year – since then I’ve not found much time for it.

All known bugs (both discovered by myself and reported by users via Google Play) have been fixed, and I’ve added a couple of enhancements on top of what was in the beta:

That’s it! Not very much really. But it’s stable and has a decent amount of users (given how niche it is – you do after all need to own a Zephyr HxM for it to be of any interest) who seem to be happy. Specifically 419 active and 2,532 total installs, with an average user rating of 4.1/5 from 11 reviews. And, also importantly, it does what I built it to do.

This is what the main graph looks like now (it’s a subtle change). The text alignment/lack of padding looks bad in screenshots but on real devices it’s fine: 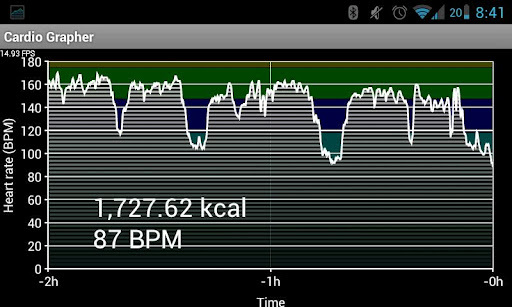 I still have a whole bunch of ideas/features I’d like to implement – the issue is finding time with which to do so. So the next release may be in 1 month or in 12+. Hopefully somewhere in between.